Óbidos Christmas Village an event for the little ones 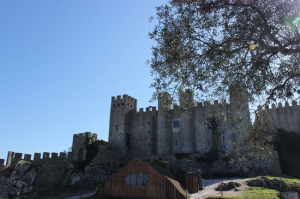 Óbidos Christmas Village is another annual event that takes place in and promises to liven up the end of the year and the Christmas season festivities.

During December, Father Christmas brings joy to the little ones and the Óbidos Castle is the ideal place for such an event.

With shows for all tastes from puppets, magicians, theater to workshops, Vila Natal tries to vary the options and thus ensure that Christmas in Óbidos is different from all the others.

In addition to the various shows, the little ones can always lose some of their energy on the Ice Lake where they can go skating and let their imagination run free, go down the Ice Ramp or take a ride on the Magic Carousel..

From December to January Óbidos Vila Natal is a mandatory stop for all those who feel the magic of Nata, l and want to make their experience even more intense.

Here the family has an important action so that with those who live the most this feeling can be experienced more intensely and thus make a big difference to the joy of the little one.

All this to say that Christmas is in Óbidos in your Vila Natal and that you can not stop by to confirm everything we have just said to you.

Still, the village of Óbidos has other annual events that will delight you!

As a rule the prices of the event change from year to year so we always recommend checking the online price on the Óbidos Christmas Village website.

Prices as a rule do not include all activities, so pay attention to the type of ticket you purchase.

There is always the chance to buy the ticket for the activity or attraction inside the Óbidos Vila Natal park but it is something to add to the ticket already purchased.

Tickets can be purchased on the official website of the event as previously indicated or through other platforms that sell it directly such as BOL.

However, tickets for the event can also be purchased in person. If so, choose to come early.

Our advice is due to two situations that generate impatience for all of us when we go to big events:

You should also be aware that there are several types of tickets at different costs, as the general entrance does not allow you to walk at all attractions or do all activities

Well, the ticket did not include everything you can do but the truth is that there is a lot to do and a full day can be short to do everything, here is a list of what you can find (since there may be changes from year to year) :

The Óbidos Criativa team is responsible for creating this perfect universe that is Christmas in the village of Óbidos.

Here you can find elves, reindeer, penguins and snowmen that introduce a unique environment for children in the enclosure.

Throughout this article our team has already given you some tips so that you can enjoy the event in the best possible way!

But here's an "abstract" style explanation:

You should arrive as early as possible as the lines are usually long. On the other hand, if you arrive early you can always park for free in one of the car parks for that purpose.

If you arrive later, in addition to not being able to park for free, you will have a harder time parking.

If you have a choice, we advise you to make the visit always during the week because at the weekend the turnout is always much greater.

If you can, raise money before you start the trip because there are few ATMs inside the village, and with a concentration of many people, sometimes it doesn't reach everyone.

The Óbidos Christmas Village is held inside the fence of the castle of Óbidos, so you will have to go through Rua Direita until you reach the entrance of the event.

You can divide this category into two different versions and it depends on the tastes of course. There are Hotels, Guest Houses, AirBnb and others that are within the walls of the castle in the village.

And this is where your choice begins! Inside the wall they have the atmosphere of a medieval village with its narrow streets and whitewashed houses, but they cannot enter the car inside the walls, so they have to park and carry their luggage behind.

If you choose to stay outside the village walls, you can park more easily at the chosen location.

Óbidos is a village full of charm and tourists. Associated with all this, we always have options to take according to our purse and what we feel like eating.

In the village there are options for all types:

If you want to communicate in order to obtain other information that you do not find in this article, you can contact the event management team.

We leave you here the best ways:

Other Festivals in Óbidos

Óbidos is considered as one of the seven wonders of Portugal because its castle, walls and narrow streets are truly unique as well as its events.

The municipality took advantage of this diamond and began to work on it so that year after year the town would be part of the national tourist itinerary.

Nowadays, with the dynamics created with events created in all seasons of the year Óbidos has managed to impose itself.

We started by speaking in this article at Óbidos Vila Natal the event that marks the end and the beginning of the annual calendar of festivities, but there are many more, now note:

This religious event attracts a large number of people to the village to see the daytime and nighttime processions.

But not only, the processions that go out to the street make us with large numbers of costumes that participate and make this festival unique.

This festival is entirely dedicated to gluttony. If it is true that Óbidos had no culture related to chocolate today when you think of Ginja plus glass of chocolate ...

In various formats and flavors this is the festival for chocolate lovers!

Latitudes is the little brother of the Óbidos Literary Festival: FOLIO.

This festival takes place in some of the city's bookstores and spaces and it is also a literary festival but dedicated only to the travel segment.

You can rent a costume and walk the streets dressed as a Queen, King, Princess, Prince, Abbot or Knight! Not enough? You can be a Viking or bring your own clothes from home (the ticket is cheaper).

The Medieval Market of Óbidos takes place in the summer and competes with the attraction with the Chocolate.

In addition to the dress you have medieval tournaments, medieval music, great processions, magic shows and other activities that make this event one of the biggest in Portugal.

Along with Latitude, the FOLIO - Literary Festival of the town of Óbidos was the one that brought the town notoriety to UNESCO that ended up declaring Óbidos as a literary town, now part of a worldwide network.

The attraction of new audiences as well as the use of new spaces in the village made this festival a widely recognized event not only in the region.

Every year there are book presentations, colloquia, exhibitions, concerts and great national and international writers are always invited.

The International Piano Week in Óbidos has been going on since 1996, and since concerts in various spaces in the village, Master Classes with renowned artists make this one of the greatest piano events in the country.

Art and Culture in Óbidos